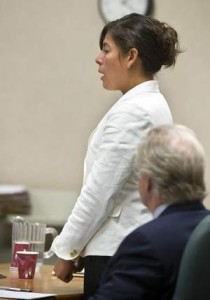 In April 2013, Giovanna Yaranga was found with a 17-year-old boy in the back seat of his car. Yaranga was facing up to 20 years in prison after admitting to having sex with the student throughout the 2012-13 school year.  As part of a plea deal, she received a suspended prison sentence of up to four years, keeping her on probation. She was also required to be listed on the state sex offender registry for 10 years and undergo counseling.