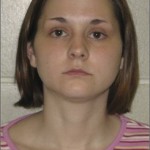 Allena Ward, 24, was sentenced to six years in prison in February 2008 for having sexual encounters with five teenage boys. Ward, a teachert at Bell Street Middle School in Clinton, met 14- and 15-year-old boys at a motel, a park, and behind a restaurant, according to USA today.  Some of her victims were her students. At trial, a forensic psychiatrist said Ward is not a pedophile, but rather a childlike victim suffering from a repressed childhood and personality disorders.  Ward was sentenced  to 15 years in prison for each lewd act, but the punishments were suspended to six years. In court, Ward said “I apologize from the depths of my heart.”