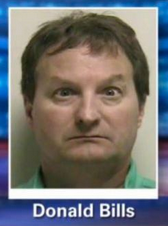 Donald Nelson Bills, a former teacher at Provo High School, was sentenced to at least eight years and up to life in prison for what a judge described as a “calculated” effort to groom and sexually abuse a teenage student. In July, Bills pleaded guilty to five felony charges including forcible sodomy, object rape, forcible sexual abuse, obstructing justice, and tampering with a witness. Bills gave a lengthy apology in court, asking for forgiveness from his victim, her family, his own wife and family, the judge and court staff, and prosecutors.