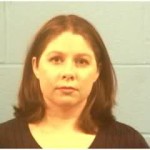 Lauren Cosgrove, a teacher at Strickland Middle School in Denton County Texas, was arrested in July 2007, for having a sexual relationship with a 13-year-old boy. She was sentenced in October 2009 to five years in prison on a charge of aggravated sexual assault. She was also sentenced to two years in prison on a charge of tampering with a witness. The court had ordered her not to contact the boy, but he testified that she picked him up outside his home in December 2008 and persuaded him to write a letter saying he lied about what happened between them. The sentences will be served concurrently, with Cosgrove eligible for parole in 2 years.